X Slider Background Settings
The Unicorn, the Gorgon, and the Manticore 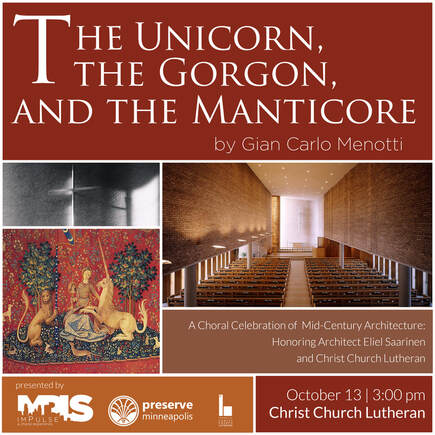 The season begins with a choral celebration of mid-century architecture presented at Christ Lutheran Church, a National Historic Landmark of Mid-Century Design by Finnish-American architect Eliel Saarinen. MPLS (imPulse) will perform Gian Carlo Menotti’s mid-century icon The Unicorn, the Gorgon, and the Manticore, which tells the ever-relevant story of a town odd-ball, his strange Medieval pets, and the harm a community can cause others through judgment and condemnation of “the Other”. The performance will also include selections from Samuel Barber’s Reincarnations and a premiere of If It Is Honest by MPLS (imPulse) Composer-in-Residence Ian A. Cook, written to celebrate Saarinen and his famed Christ Church Lutheran.

After the concert, join our collaborator, Preserve Minneapolis, for an architectural tour of the building.

This is a family friendly show.

Accessibility: Accessible seating available. Additional accessibility needs will be honored with advanced request. Please email us at info@mplsimpulse.org or reach us by phone at 319-830-3021.
Tickets
Meet our collaborators:
Performing Artists:
Nathan Cicero is a Twin-Cities based pianist specializing in opera, musical theatre, and choral music.  Most recently, he served as a music director and pianist for Skylark Opera Theatre, in addition to ongoing appointments as Accompanist and Assistant Conductor of the South Metro Chorale and Music Director at the Church of St. Mark in St. Paul.  In 2018, Nathan earned his Master of Music in Vocal Accompanying from the Peabody Conservatory, where he studied with Eileen Cornett.  While at Peabody, he held a graduate assistantship in Opera Accompanying, accompanied regularly in the vocal studios of Denyce Graves, William Sharp, and Stanley Cornett, and was a guest vocal coach and masterclass presenter at Morgan State University and the University of Maryland-Baltimore County.  A native of Wisconsin, he earned a BM in Piano-Collaborative Emphasis from the University of Wisconsin-Eau Claire, where he also was also heavily involved in the voice and choral division, and won the orchestral conducting competition in 2016.  In the summer of 2017, Nathan was a vocal accompanying fellow at the Miami Music Festival, where he assisted in preparing singers for operatic roles and accompanied masterclasses and recital performances.  As a life-long lover of choral music, he is thrilled to make his debut with MPLS!